The Dean Variety Hour - a Salute to Dean Martin 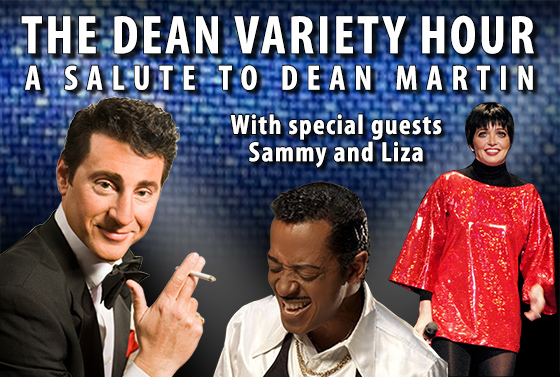 In the fall of 1964 with his monster hit "Everybody Loves Somebody Sometime" as the number one song in the country NBC approached Dean Martin with the idea for a variety show. Dean immediately said, "No way Pally it sounds like too much work for me". NBC was persistent however and Dean continued to make many demands thinking they would leave him alone. Eventually NBC agreed to pay Dean an astronomical amount of money with no rehearsal time so Dean agreed to do the show.

The Dean Martin Show premiered on September 16th, 1965 and every Thursday night from 1965 to 1974. The show was one of the highest rated television shows on the air. The songs, comedy routines and guest stars were all top of the one line and featured such performers as Bob Hope, Bing Crosby, Frank Sinatra, John Wayne, Dom Deluise, Judy Garland and many more. While the guest stars and cast rehearsed Monday through Saturday Dean showed up on Sunday and taped the show with no rehearsal.

Now ARB Productions is honoured to present a tribute to The Dean Martin Show featuring Joe Scalissi, one of the world's finest Dean Martin impersonators. The show includes many of Dean's great hit songs as well as comedy routines and guest artists performing some of the most popular songs of all time. Also included in the show are other great impersonators who pay tribute to performers such as Bob Hope, Marilyn Monroe, Red Skelton, Jack Benny, Liza Minnelli and Ann- Margaret. This show will bring back great memories of a special era of entertainment that provided audiences with legendary performers, memorable music and lots of fun.