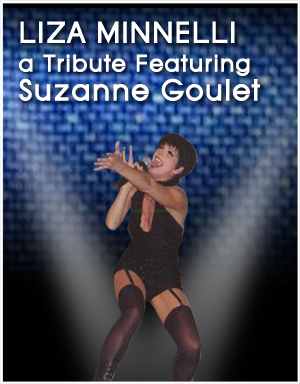 Born in Montreal, Canada, Suzanne Goulet began tapping at the early age of four and a few years later studied ballet and jazz at Les Grande Ballets Canadiens. She was in her teens when she joined her first professional dance troupe and was cast as one of the four dancers on the coast to coast Canadian television series, "The Juliet Show." or the 100th anniversary of the Statue of Liberty, presented live on ABC-TV.

At the same time, Suzanne developed her talent as a Choreographer/Director on the "Song of America" cruise ship. Soon after she was asked to direct and choreograph a show for the "Lido de Paris Girls" at Maxim's in Geneva, Switzerland. Suzanne returned to Japan, Valley Forge, PA and Atlantic City (Caesar Casino) with Greg Thompson's Productions, this time as an impersonator of Liza Minneli. Her new career also took her to Aruba and Germany. After winning a Look-a-Like competition sponsored by Smirnoff in New York City, Suzanne went on to win the national award in Hollywood which included an appearance on the soap opera "Santa Barbara."

Suzanne, accompanied by two dancers, presented her self-contained show "A Tribute to Liza" at the Estrel Hotel in Berlin, Germany in 1996 and then at the Alhambra Casino in Aruba in 1997. A year later Suzanne up-scaled her show by making it a bigger production with 4 dancers, 12 costume changes and upgraded sets and lights. The show was presented at the Holiday Inn in Aruba from December 1998 through July 1999. Suzanne has received hundreds of enthusiastic comment cards from audience members, many describing the show as "the best show Aruba has seen in 20 years." The Aruba News claimed "Suzanne Goulet is Perfection."