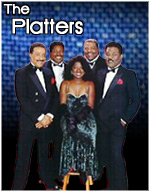 The Platters began as an all male quartet in 1953. Members Tony Williams, David Lynch, Herb Reed and Alex Hodge called themselves "platters" the name used in those days for records. In 1954 Tony brought the group to Buck Ram for management. Buck Ram added a girl, fifteen year old Zola Mae Taylor, who was formerly with The Queens. In August, 1954 Alex Hodge left the group and was replaced by Paul Robi.

Buck Ram led The Platters to their first recording contract with Mercury Records and in 1955 "Only You" became The Platters' first gold hit record. Under Ram's careful direction, management, and coaching The Platters garnered 16 gold records and attained international fame and immortality through the romantic ballads that continue to be played all over the world today. Some of the other Platters hit songs include “The Great Pretender”, “My Prayer”, “Twilight Time”, “Harbor Lights”, “Smoke Gets In Your Eyes”, “Enchanted” and many more.

Even from its early beginnings, The Platters experienced several changes in members, but there have only been three lead singers in its history: Tony Williams (1953-1960), Sonny Turner (1960-1970), and Monroe Powell (1970 to present). Monroe, the last lead singer hired by Buck Ram, has been lead singer for the group for the past 27 years and has earned the public's goodwill.