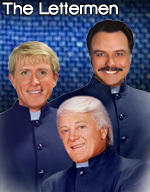 From their first hit in 1961 - "The Way You Look Tonight" - through current hits of today, the sound is undeniably Lettermen. Nine gold albums and scores of top singles including "When I Fall in Love", "Goin' Out of My Head/Can't Take My Eyes Off You", and "Put Your Head on My Shoulder", attest to a popularity that has endured through several generations. In 1962, "Come Back Silly Girl" reached No.17 and The Lettermen's debut album, "A Song For Young Love", hit the top 10, their first of 32 straight Top 40 Albums.

The vision for The Lettermen was of three very strong soloists who also had the ability and showmanship to perform and entertain an audience, but who also had the discipline needed to be group singers. The sound they came up with was a sound between the big band vocal groups such as the Modernairs, Pied Pipers and Mills Brothers, and the early R&B rock groups such as the Flamingos and the Platters.

With thousands of sold-out shows to their credit, The Lettermen are constantly sending valentines to their audiences with each note of every love song. Versatility of group members and personal tastes let each display a variety of musical styles - adapting through the years to include whatever the current trend may be. Whether singing acappella or backed by an entire symphony orchestra, the Lettermen theme still remains the love song. Lending that well-known harmony to every arrangement, they have proven that love ballads have an appeal that knows no boundaries and will continue to stand the test of time for many years to come.