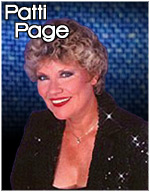 She wasn't called "The Singing Rage" for nothing. And seven decades after the "raging" began in Tulsa, Oklahoma, on a little known radio show on which she was the featured singer, Patti Page remains an icon, a beloved singer who changed the face of pop music and the way it was recorded. Her accomplishments in music and television remain unparalleled even today.

Hyperbole or fact? Fact! All fact! In the course of her seven decade recording career, Patti Page has sold approximately 100 million plus records, making her one of the biggest, if not the biggest selling female recording artist in history. She has 15 certified gold records and her recording of "Tennessee Waltz," at ten million sold, remains, the biggest selling single ever recorded by a female artist. She has charted a staggering 111 hits on pop, country and R &B lists ("Tennessee Waltz" was # 1 concurrently on all three charts), a feat no other artist in recording history can claim!

Patti Page is the unrecognized (till now) pioneer in the field of overdubbing, of multiple voice techniques - a ground breaking, innovative endeavor that began with her first Top Twenty hit, "Confess," in 1948. Additionally, it was Patti Page who took country music out of the country and onto the pop charts with such million record sellers as "Old Cape Cod", “With My Eyes Wide Open“, “Allegheny Moon” , “Hush Hush Sweet Charlotte” and, of course, the legendary "Tennessee Waltz." She was the first crossover artist bearing her name on all three major television networks.


MP3 AUDIO FILES
How Much is that Doggie in the Window
Mockingbird Hill
Tennessee Waltz
All site contents copyright © 2019 ARB Productions Inc.
Site by Ballpoint Press