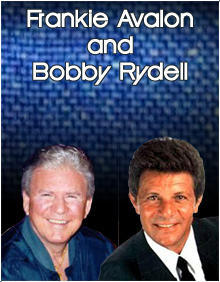 In the 1950's, these two teen idols from the same South Philadelphia neighborhood ruled rock and roll and now, more than fifty years later, Frankie Avalon and Bobby Rydell continue to be an overwhelming concert success. Frankie & Bobby is an entertaining 90-minute show that treats audiences to a performance from each star as well as a spectacular finale with the two stars together on stage.

The show begins with a performance from Bobby Rydell that includes his mega-hit "Volare" as well as a medley of songs from his classic motion picture "Bye Bye Birdie." His performance is filled with family stories, comedy, and soulful music. Bobby serves up a mix of pure musical relaxation that is simply wonderful.

Frankie Avalon captivates audiences, singing all of his greatest hits including "Venus," "De De Dinah," and "Bobby Sox to Stockings." A highlight of his segment is a montage of pictures and stories from the past. Frankie also thrills his fans when he takes a stroll into the audience for an up close and personal touch. This spectacular show concludes with the two former teen idols combining talents in a tribute to the material of Bobby Darin, Rick Nelson and Bill Hailey. Frankie & Bobby is truly filled with moments to remember.