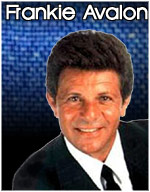 Born in Philadelphia, Frankie's singing talents were recognized early as a teenager. His early songs, "De De Dinah" and "Venus" were the first of many smash hits. Some of Frankie's other hit songs include "Bobby Sox to Stockings", "Just Ask Your Heart", Gingerbread" and "Why". His talents were in demand on many of the most popular television shows in the 60's. Frankie Avalon's mentor and friend Dick Clark also had him appear on his show a number of times.

Frankie's list of accomplishments grew as he performed in over thirty movies with the 60's Beach Movies being his most successful. Over the years he has also appeared in numerous TV shows as well as performing in a dramatic role in the historical western film "The Alamo". In recent years he has appeared in stage productions of the popular musical "Grease".

He regularly perfoms in a highly successful show known as "The Golden Boys" which features Frankie, Bobby Rydell and Fabian. Frankie Avalon has performed for over 55 years and is still considered an international star full of youth and vitality. He continues to perform in concert halls and casinos across North America to sold out audiences.