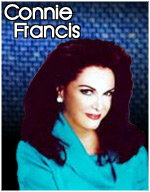 Connie Francis is considered one of the best female vocalist of all time. She was the top female vocalist of the late 50's and early 60's, amassing records sales equal to and surpass those of many of her male contemporaries. Connie Francis branched into big band, country, ethnic, and many other styles of music. She has the knack of wrenching the emotions with her powerhouse voice. Connie's music, transcending any and all boundaries, is capable of taming the beast, soothing the wounded heart and lifting the fallen spirit. She uses her multifaceted talents to successfully perform concerts each year.

Connie Francis' key to her early success were a couple of things. She had Dick Clark of American Bandstand who was a tremendous influence for her. If Dick played a record, then it was a hit. He introduced her song Who's Sorry Now on January 1, 1958 saying, "Here is a new girl singer that is heading straight for the number one spot." The song climbed over the million mark in six months after its release. She also had talented people like Neil Sedaka and Howie Greenfield who wrote hit after hit for her. Many of these rock-n-roll songs made the top ten list and made her the most played on the radio in the early 1960s. She described it as a wonderful marriage for singer and songwriter. But she wouldn't have made if it wasn't for Dick Clark.

Connie had a multitude of hit songs over the years including her biggest hit 'Who's Sorry Now. He other great hit include 'Stupid Cupid', 'Lipstick On My Collar', 'Everybody's Somebody's Fool', 'Don't Break The Heat That Loves You', 'Where The Boys Are'and many more. Connie Francis continues working the concert circuit as a top performer and is loved by her thousands of loyal fans who support her concert dates across the country.